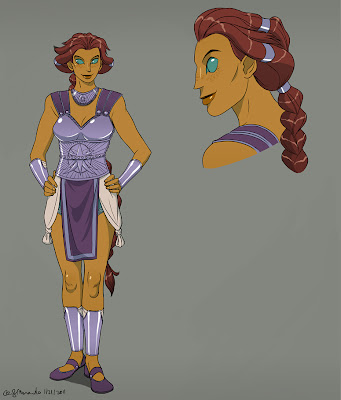 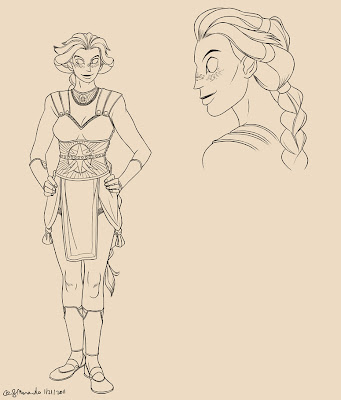 Cross-posted again from Facebook:
"My take on Koriand'r, better known as Starfire! I wanted to accentuate her feline qualities, so I gave her "whisker"-like freckles and thin pupils. I kept her hair big on top (flat-haired Kori just doesn't do it for me), but pulled it back in a thick braid so it's slightly more manageable. The armor was partly influenced by ancient Persian armor; the symbol I designed as a sort of Tamaranean emblem that could also appear on a flag or...more armor I guess. I kept some cleavage cos I thought Kori would want it that way."
Additional comments:
Basically I wanted to have Koriand'r as a sort of foil to my Raven design. Whereas I made Raven willowy and androgynous, Kori is more statuesque and voluptious, and a little sunnier in both color and disposition!
ADDENDUM: Dean Trippe was kind enough to feature this design on his excellent blog, Project: Rooftop! P:R is one of my favorite websites on the whole dang internet, and Dean's one of my favorite super-hero artists, so it's always a treat to be included! Thanks, Dean!
Posted by Carly Monardo at 9:26 PM 1 comments

Buy my book on Amazon!